Many hikers who complete the 2660 mile long Pacific Crest Trail (PCT) running from the border of Mexico to Canada say their favorite part was the Goat Rocks Wilderness of Washington State. The combination of glaciers, majestic peaks, abundant wildlife, sweeping waterfall-filled valleys and wildflower gardens makes the Goat Rocks a uniquely beautiful wilderness. Fortunately for hikers, the well-maintained PCT runs right through the crest of the range, providing a scenic yet challenging way to experience the area.

As part of a training regimen and gear shakedown for an upcoming hike of the 260 mile John Muir Trail (JMT) in California, my friend Barney and I did a four day 58 mile backpack along a section of the PCT in Washington state, including most of the Goat Rocks. Starting just East of Mount Rainier at Chinook Pass, we hiked the PCT Southbound across White Pass and Hwy 24, through the Goat Rocks Wilderness and exited at Walupt Lake on the Southwest corner of the Goat Rocks. Below is a filmstrip image gallery for the trip, and under that are some notes and experiences from the trip. 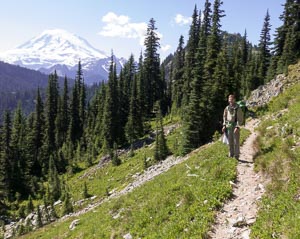 After setting up a car shuttle at Walupt Lake, we got started with our hike from Chinook Pass at noon. It was a sunny, warm day with great views from the ridge line trail, much of which is near treeline. Being so scenic with easy access from Chinook Pass, the first 3 or 4 miles are very popular with day hikers.

We were surprised to meet through-hikers doing the entire PCT, most heading North, but a few heading South. Most “PCT thrus” start in mid-April on the Mexico border and hike Northbound (NOBO) to end in September on the Canadian border – a 5 month+ hike. So NOBO thrus usually hike WA state in late August at the earliest. 10% of PCT thrus are Southbound hikers (SOBO), usually starting on the Canada border in early June, finishing WA state by the end of June. We met our first NOBO thru this afternoon – he started in mid-May and was on pace to end the second week of August – that’s a 3 month pace, or 30 miles per day on average! The two SOBO thrus we met were trying for a similar pace – they were putting tons of Leukotape onto their feet for blisters when we met them, but soon blasted on by us moving fast.

We got a little overheated in the middle of the afternoon, but had enough water to hike well. We pushed a few extra miles to camp, getting into camp at 8:20 pm. Got a pretty good night’s sleep for the first night out (I usually sleep poorly the first night). 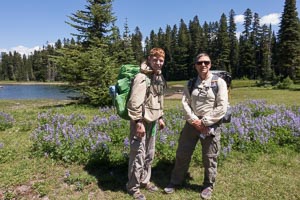 We got up a little late at 6:30 am, on the trail hiking by 8:00 am. Nice and cool for a while hiking in the morning, lots of pretty forest, small meadows and ponds. Later in the day the sun got higher and hotter, but we had lots of shade for the most part. We also had lots of mosquitos because of the ponds and small lakes (mosquito factories).

We met more PCT thrus today, and some PCT section hikers doing just the WA portion of the PCT from the Columbia River Gorge to the Canada border. Also chatted with some backpackers doing local in-and-out or short loop trips. Most of today’s hike was fairly remote, so we didn’t see any day hikers until we got near White Pass.

We got to White Pass at 3:15 pm, pretty early in the day, and decided to just camp at the campground. We enjoyed a nice long swim in the warm waters of Leech Lake (no leeches, we checked) – good to cool off the tired feet. We slept pretty well in the campground – I put the sleeping bag right out on the picnic table for a warm starry night. 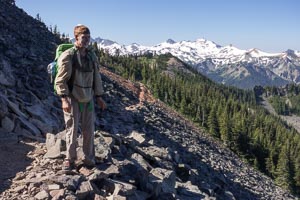 Got a good early start to beat the heat, on the trail by 6:00 am. The first 3 miles had the most mosquitos we saw so far. I broke down and put a little DEET around the edges of my sun hat and on the backs of my hands – I prefer physical (clothing) barriers if possible. After hiking past White Pass ski area it became more alpine and the bugs were suddenly gone (for the most part). We met a mix of day hikers, local backpackers and PCT thrus today. The PCT thrus are generally easy to recognize – they are mostly young, slim and fit, wearing shorts and colorful running gaiters, and carrying a small, light backpack.

It was a long, dry and hot yet scenic ridge walk today to reach the Goat Rocks, where we took the last protected campsite before climbing the alpine ridge to Elk Pass. I feel pretty good for having done 17 hot miles and the feet are a little less tired than yesterday. We have awesome views of Mt. Rainier to the North and many other peaks and ridges of the Cascades around us. I think we can even see Mt. Stuart in the distance at 20 degrees magnetic – Barney and I climbed that big granite mountain last August with our friend Isaac. A beautiful sunset and a nice cool breeze to start off the nights sleep. 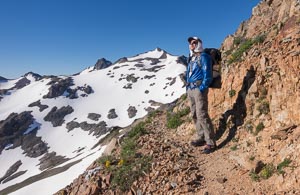 I got up to pee around 2:00 am and saw Barney’s tent billowing around in the wind with a lot of slack in the guylines. So I retightened the lines and put slip knots on the ends to keep them from slipping any more. I envy Barney’s ability to sleep so soundly! By morning the tent was limp and billowing again. Turns out the lines were fine, but the two trekking poles (breaking in a brand new pair) holding the tent up had loosened and shortened overnight. Mystery solved.

Anyway, we slept in till 6:30 am and got up to a surprise in the valleys all around us – all filled with fog up to about a thousand feet below us. The fog was slowly pushing further up the valleys and getting higher, thicker and pouring over low passes. We packed up quick thinking the weather would take a turn later in the day. The first two hours was a cool and windy hike along the Goat Rock’s Knife Edge: a well-constructed trail right on the crest of a steep alpine ridge with amazing views in all directions. As the morning wore one, the sun burned off the valley fog to give us another sunny day – a little cooler and windier than the last three days.

Next we did a side trip up Old Snowy (7900 ft), the largest peak in the Northern Goat Rocks. Then we hiked down and across the Snowgrass Flat area, an alpine flower garden with picture-perfect views and lots-and-lots of people. Big groups, small groups, kids, scouts, dogs, families, foreign travelers, local fishermen, photographers – feels more like a National Park than a Wilderness area. It’s a popular destination for day hikers and weekend backpackers with easy access trails from the West.

On arrival at Nanny Ridge, which was our planned campsite for a fifth night, we encountered a dozen or so kids swimming and frolicking in the small pond (the only nearby water source) and tents and more people spread around the area. So we decided to hike the last 4 or 5 miles down to the car and end our trip a little early. After a hot descent on the Nanny Ridge trail followed by a cool swim in Walupt Lake, we drove Barney’s car back to Chinook Pass to my vehicle and began the long drive home.